To honor a designated group or organization that has collectively contributed to public health program development, toward enhancement of public health in the Commonwealth.
Guidelines: Efforts must be well-described and include evidence of continued health contributions.

The COVID-19 pandemic revealed the bare truth of health and income disparities, whereas we saw disproportionate cases of COVID-19 among our low-income neighborhoods, our Black and Brown neighbors, and those in the worse positions to be ill.” The recipient of the 2022 KPHA Group Award worked diligently with numerous community partners to address the needs of the city’s most vulnerable populations. Over the course of their response, this group worked to secure resources such as housing, food, cleaning supplies, prescriptions, infant supplies, opioid Medication Assisted Treatment (MAT), and personal protective equipment (PPE).

Not only did this group secure resources, but they worked to create a more equitable response for their community. The organization was able to connect with populations who were most vulnerable to social isolation and severe COVID-19 illness. Minority populations, those experiencing houselessness, and neighborhoods disproportionately impacted by higher rates of unemployment and median household incomes below the national average were just a few of the populations this group worked to reach with their response efforts.

As of February 2022, this organization has received 21,655 requests for community support from residents and community members of surrounding areas, successfully fulfilling 6,072 food requests, 5,238 durable goods requests, 1,116 isolation housing requests, 548 prescription requests and 68 MAT requests. Needs of those with differing linguistic and cultural needs led to the assistance of another 859 unique households.

As a result of this group’s dedication to community service, other programs have initiated services to sustain the services that were offered through the pandemic. 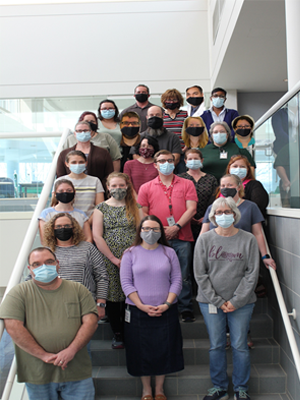 This year’s KPHA Group Award goes to a group of public health professionals that have contributed to the enhancement of public health in Kentucky to keep our populace healthy and free of disease and unhealthy environmental exposures: THE KDPH DIVISION OF LABORATORY SERVICES!

In the Summer of 2020, the team of individuals at DLS initiated a project to develop a platform to sequence SARS-CoV-2 specimens. Working tirelessly, they reached this milestone in a short amount of time, leading the efforts in our state for the sequencing and bioinformatics for SARS-CoV-2. Additionally, the lab now has a bioinformatics initiative as a complement to Next Generation Sequencing technology. The development of the Nextstrain visualization platform aids the real-time tracking and monitoring of SARS-C0V-2 in our state. With this progress, DLS is capable of advanced molecular detection of COVID19 through pathogen surveillance. Kentucky has now entered the modern era where contact tracing and outbreak investigations can be enhanced with Next Generation Sequencing technology to unveil the Genomic Epidemiology of SARS-CoV-2.

The Kentucky State lab is the only lab in the state to possess the capability to carry out this kind of phylodynamic analysis, and among the few states in the U.S. that possess this capability. They serve as a model for many other states who are currently working developing this capacity.

Congratulations to the KDPH Division of Laboratory Services! KPHA commends you for your tireless efforts to achieve advanced surveillance capabilities to guide our fight against COVID19 as we all work together to protect, promote and prevent.

According to the CDC, pediatric abusive head trauma, commonly called shaken baby syndrome, is a leading cause of physical child abuse deaths in children under 5 years of age in the U.S. Additionally, there are about 3,500 sleep-related deaths among US babies each year with 2 in 5 mothers reporting using soft bedding, which is not recommended. Thus, it is critical to inform new parents how to keep their babies safe and learn how to reach out when support is needed.

Prevent Child Abuse Kentucky created an educational video for new parents about safe sleep practices and pediatric abusive head trauma. It includes the personal testimony of a parent whose little boy suffered from PAHT at the hands of a caregiver when he was an infant. The Kentucky Hospital Association distributed the film to all birthing centers in Kentucky, who are in a unique position to provide immediate support to parents. WellCare sponsored this film, which enabled more than 50,000 new parents to view it in over 100 hospitals across the Commonwealth. With approximately 54,000 babies born each year in Kentucky, this is quite the impact!

KPHA commends you for your collaborative work to prevent death and disability, to strengthen families, and to improve the health of our communities.

This year’s KPHA Group Award is awarded to the three organizations that made this possible: Prevent Child Abuse Kentucky, WellCare Health Plans & the Kentucky Hospital Association!